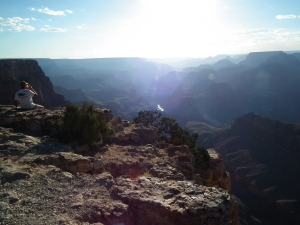 “In the beginning…And God saw every thing that he had made, and behold, it was very good…” Gen. 1:1a, 31a. Good morning! It’s Monday, and yes, it too, is the day the Lord has made and needs to be rejoiced.  I know I hear the groans and moans as another work week begins and as bad as some believe Monday’s to be there is another day that in my opinion, for what it’s worth, ranks high for the title of creation’s saddest day.  The good news, it also ranks high for the happiest.

“Then the seventh angel poured out his bowl upon the air…And there were flashes of lightning and sounds and peals of thunder, and there was a great earthquake, such as had not been since man came to be upon the earth…every island fled away, and the mountains were not found. And huge hailstones, about one hundred pounds each, came down form heaven upon men…its plague was extremely severe.” From Rev. 16:17-21.

This has to be one of the saddest days for all creation. It hasn’t happened yet but had it’s beginning in the garden of Genesis 2 and 3 when sin entered the world. From there the world spiraled downward mounting up God’s wrath against it, until it was poured out in His fullness on the holy Son of God as He suffered and died every sinner’s death. His death satisfied God’s wrath completely, freeing all who would believe from ever  having to experience it. Christ’s death and resurrection gave birth to hope to the world, a sure hope of peace with God for all who believe and receive the truth. Jesus replaced God’s wrath with God’s good will toward men. He turned our sorrow to gladness our mourning to joy. No one ever need taste God’s wrath of death again.

Throughout the ages the message resounded through the earth. “But the word of the Lord abides forever. And this is the word which was preached to you.” 1Pet. 1:25. But the world wouldn’t hear.  “He that is of God heareth God’s words: ye therefore hear them not, because ye are not of God.” John 8:47. The world refused to hear. Their unbelief proclaims Christ’s death as worthless, despising God’s gift that cost Him the life of His Son.

The love of God spurned ends in Revelation 15 and 16. Those rejecting the gift of God’s wrath poured out on His own Son must face the fierce wrath of God poured out upon themselves. “Go and pour out on the earth the seven bowls of the wrath of God.” Rev. 16:1b. The day that doesn’t have to be. I can think of nothing sadder.

God desires mercy and withholds the day of His wrath. “The Lord…is patient toward you, not wishing for any to perish but for all to come to repentance. But the day of the Lord will come…” 2Peter 3:9, 10. So cling to the cross of Christ, for in Him God’s wrath is satisfied.

And what makes it among the happiest day? The moment it is finished. “…seven angels who had seven plagues, which are the last, because in them the wrath of God is finished.” “Hallelujah! Salvation and glory and power belong to our God; Because His judgments are true and righteous…” Rev. 15:1 and 19:1, 2.