Part 3 of Kings & Kingdoms, Life in the Kingdom, Continued 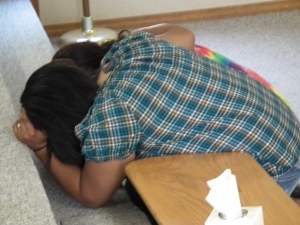 “Let the wicked forsake his way,

and the unrighteous man his thoughts:

and let him return unto the LORD,

and he will have mercy upon him;

and to our God,

for he will abundantly pardon.”

Do you remember the day the heavenly Father drew you to Himself through the Holy Spirit’s work in your heart.? Maybe, like my daughter, you remember the first time you heard His voice but did not respond positively.

Tears flowed with sobs as the song began to play. My attempts to console her and quiet the sobbing served no purpose. As discreetly as possible I carried my four-year-old daughter into the pastor’s study and shut the door. I sensed the Lord speaking to her tender heart. She didn’t understand nor did I how to explain what was happening. By the time the church service ended her crying stopped and we left by the side door.

Fast forward two years later, we stood side by side as my husband, the pastor, extended a simple invitation to receive Jesus as Savior. No response by anyone, or so I thought.

The amen sounded as my daughter tugged on my sleeve. “Whatcha need, Sis?”

Her wide blue/green eyes showed no unusual emotion as she spoke. “Mama, I asked Jesus to come into my heart and forgive my sins.”

I tried to keep in check the joy bubbling in my heart. “Well, do you believe He did forgive you and now lives in your heart?”

If you have never received  Jesus’ forgiveness of sin , the question above remains a mystery to you. You are still bound by the guilt, punishment, and power of sin over your life. But your life doesn’t have to stay in captivity. Recognizing your sinful state is the first step.

A parable, a Pharisee and a woman reveal the need and response in both kingdoms.

Luke 7:36-50 relates the whole account. Simon is the Pharisee, the woman a known sinner who desired to show the Lord her love.

Simon, saw only a sinner touching a supposed prophet which caused him to doubt the veracity of Jesus’ identity. For surely He knew what she was if indeed He was a prophet.

“And Jesus answering, said unto him,

Simon, I have somewhat to say unto thee…

“There was a certain creditor which had two debtors:

Tell me therefore, which of them will love him most?”

In the world’s kingdom

This is the way the world looks at forgiveness. The more owed the more we love. We forget that both were unable to pay the debt. Jesus turns Simon’s eyes toward the woman, revealing his own sinful state.

“Seest thou this woman? I entered into thine house,

Wherefore I say unto thee,

Her sins, which are many, are forgiven:

for she loved much…

Thy sins are forgiven…

These scriptures once bothered me for lack of understanding. I wanted to love Jesus like that woman. I didn’t understand at that time my sins put me in as much debt as the woman’s sins. For it was a debt I could not pay. When I understood this, my love for Jesus began to grow and continues today. I needed His forgiveness as much as this woman. It cost Jesus the same to forgive me as it did to forgive her. I needed much forgiveness.

Don’t confuse her actions as her means of forgiveness. They were her outpouring of a heart washed clean from its sin. Jesus made it clear her faith saved her.

Jesus revealed Simon’s lack of devotion showed he didn’t understand forgiveness, nor does the world today.

“…But where sin abounded,

grace did much more abound.”

“And the grace of our Lord was

exceeding abundant with faith and love

which is in Christ Jesus.

This is a faithful saying, and worthy of all acceptation,

that Christ Jesus came into the world

to save sinners of whom I am chief.

Howbeit for this cause I obtained mercy,

that in me first Jesus Christ might shew forth all longsuffering,

for a pattern to them

which should hereafter believe on him to life everlasting.

Now unto the King eternal, immortal, invisible, the only wise God,

be honour and glory for ever and ever. Amen.”

The apostle John writes the following in his first epistle, the first chapter. He writes to believers not yet perfected and needing the dust of the world washed from their feet, not for salvation, but for joy in fellowship with the Lord.

“And these things write we unto you, that your joy may be full.”

What does Jesus have to say to your heart about forgiveness?

7 thoughts on “The Kingdoms’ Abundance”