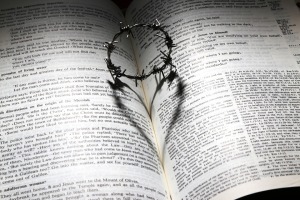 When someone says they need to have a heart to heart, we understand the person wants to discover or relate meaning behind an action. Our heavenly Father has had a heart to heart with his creation. He sent Jesus to relay his heart’s message through the gospel.

“For I delivered unto you first of all that which I also received,

how that Christ died for our sins

according to the scriptures;

And that he was buried,

and that he rose again the third day

according to the scriptures:”

“Christ died for our sins…

God reveals his heart through the love of his Son, his sacrifice and his elevation of us in his kingdom –

“And from Jesus Christ, who is the faithful witness, and the first begotten of the dead, and the prince of the kings of the earth.

The scriptures reveal God’s suffering heart through Christ’s suffering. It was all for us.

and I am full of heaviness;

and I looked for some to take pity,

but there was none;

and for comforters, but I found none.

They gave me also gall for my meat;

and in my thirst they gave me vinegar to drink.”

“And after threescore and two weeks shall Messiah be cut off,

but not for himself…”

And that he was buried…

Through Christ’s burial God manifests his heart to put away the flesh in order to receive new life.

“And when Joseph had taken the body,

he wrapped it in a clean linen cloth,

and laid it in his own new tomb,

which he had hewn out in the rock:

and he rolled a great stone

to the door of the sepulchre and departed.”

“And he made his grave with the wicked

and with the rich in his death:

because he had done no violence,

neither was any deceit in his mouth.”

“And when they had fulfilled all that was written of him,

they took him down from the tree,

and laid him in a sepulchre.”

and that he rose again the third day…

In the resurrection of Christ, God reveals his heart to guarantee we will be with him forever.

“And the angel answered and said unto the women,

Fear not ye: for I know that ye seek Jesus,

He is not here:

for he is risen, as he said.

Come, see the place where the Lord lay.”

“But God raised him from the dead:

And he was seen many days of them

which came up with him from Galilee to Jerusalem,

who are his witnesses unto the people.”

“But now is Christ risen from the dead

and become the firstfruits of them that slept.”

“I am he that liveth, and was dead:

and, behold, I am alive for evermore. Amen;

and have the keys of hell and of death.”

according to the scriptures:”

God’s heart is truth as seen in the fulfillment of all the scriptures.

“For thou wilt not leave my soul in hell;

neither wilt thou suffer thine Holy One to see corruption.

Thou wilt shew me the path of life:

in thy presence is fulness of joy;

at thy right hand there are pleasures for evermore.”

“Now the LORD had prepared a great a fish to swallow up Jonah.

And Jonah was in the belly of the fish

“For as Jonas (Jonah)

was three days and three nights in the whale’s belly;

so shall the Son of man be

three days and three nights in the heart of the earth.”

“Therefore (David) being a prophet,

and knowing that God had sworn with an oath to him,

that of the fruit of his loins,

according to the flesh,

he would raise up Christ to sit on his throne;

He seeing this before

spake of the resurrection of Christ,

that his soul was not left in hell,

neither his flesh did see corruption.

This Jesus hath God raised up,

whereof we all are witnesses.”

From God the Father’s heart to Jesus, God the Son’s heart to the heart of all who will receive it –

“For the Son of man is come

to seek and to save that which was lost.”

This is the heart of God.

4 thoughts on “Having a Heart to Heart”